Specializing In Quick Release For All

Late at night or early in the morning, Bridgeport Bail Bondsmen are available all the time!

Located in Bridgeport, our bail bonds Bridgeport service is the most affordable, fast and convenient. When a friend or family member is arrested at any local Bridgeport jail, 3-D Bail Bonds is the No.1 option for Bridgeport, CT bail bonds, with the cheapest bail bonds fees, and flexible payment plans. Only 3 percent down and a signature will get your loved one out tonight. Speak to our trusted Bridgeport bail bondsmen now by calling (203) 838-4920.

Because when an arrest happens, you need help right away, a local bail bondsman is near you. Bridgeport Bail Bonds is open 24 hours with an agent near you.

3-D Bail Bonds offers fast bail bonds service near you 24/7. Rest assured that whether you have a small bail at the Bridgeport Correctional Center or a large one at the Bridgeport police station; our agents can process it right now. We bail you out of jail in a matter of minutes.

Call 203-838-4920 and one of our Bridgeport Bail Bondsmen or Bonds women will answer any questions you may have. We guarantee the prompt release of your loved one from jail 24 hours a day.

When needed, you can finance bail with 0% interest! Speak to us, some flexible payment plans start at as low as $25 per week! Ask for bail bonds payment plans today and find the cheapest bail bond possible.

What People Say About our Bridgeport Bail Agents

Rayne C.
19:00 21 Sep 22
Liyah and her manager were super nice and informative when it came to my questions. Hopefully I personally won’t ever have to use them for myself but if i do i’d be calling them!

Kristy L.
16:37 19 Jul 22
Thank you for making the process easy to get my husband home. Very kind and respectful as well!!

Veronica R.
11:17 15 Jul 21
I would definitely recommend 3 -D bail bonds recently just use them they respond to your phone calls as quickly as possible, they show care for what you are going threw very pilot, they work in a good paste I would gladly tell you they will meet your needs as for example minimum down but show proof of employment and and references and if you qualify for payment plans that also a choice with terms and conditions, so if your in need of a great professional bonds team call them I was so happy they were able to help.

tami C.
23:59 23 Jun 21
When I call looking for a bondsman Jason answered the phone very polite and helpful Explained everything very simple so I would understand what need ed to be done In Jordan met me Fill out paperwork They were both very pleasant And understanding to my situation If I ever need again I would definitely call them back

James W.
14:39 22 Mar 21
I had a bondsman named Jordan who went above and beyond to help me from the start and continuted to do so after my release he kept me up to date with changing court appearances during the pandemic and was and overall professional this is the only bailbonds service I will be using in the future and I recommend them to anyone who’s going thru legal issues

Matt R.
03:28 18 Oct 20
I'm glad I contacted 3-D Bail Bonds. The folks there are extremely professional and they took the time to answer all of my questions. They got my friend bonded out faster than I expected. They are a great company to do business with.

Why Choose Our Bridgeport Bail Bondsmen?

Licensed since 1997, our Bridgeport bail bondsmen are the best for bail bonds. You should choose 3-D Bail Bonds because no one would handle your needs with the empathy, care, and privacy like our Bridgeport bondsmen. Trust our statewide network of bail agents who are licensed, experienced, polite, reliable and always available for all your bail needs and questions. The arrest of a loved one can be very overwhelming and confusing at times, which is why our 3-D Bail Bonds’ team of experts is here ready to help 24 hours, seven days.

Finding the cheapest bail bond option after a sudden need to post bail may be the most important aspect in your search, rest assured that payment plans with no interest are available. We are dedicated to work creative financing options, so you go on with your life after bail.

Posting a bail bond in Bridgeport is easy. You will need someone able to sign for the person in jail, this signer would secure the appearance of the defendant in court. To sign on a bail bond, the person must be at least 18 years-old. Most bail companies would prefer a family member to sign, depending on the bond amount.

The Cost of Bail

The cost of a bail bond in Bridgeport, CT is regulated by the Insurance Department. Here you can find the state-mandated fees for Connecticut and the percentage needed at the time of posting the bond. In the event that you don’t have the full fee amount, 3-D Bail Bonds offers financing options with zero interest for up to 15 months. Contact us today for more details. 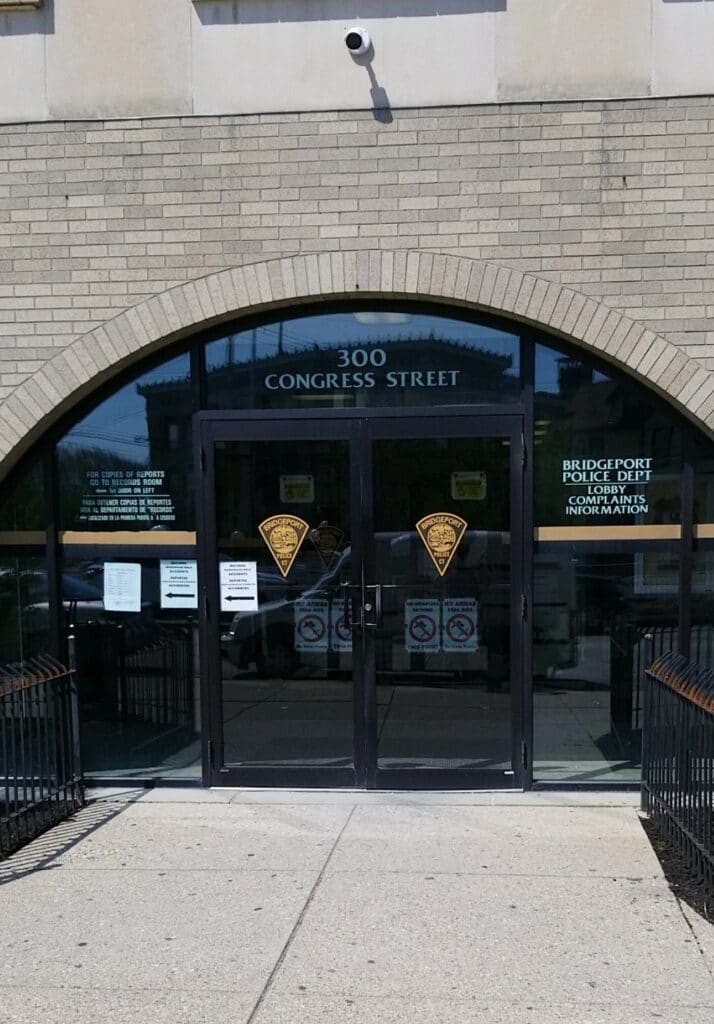 The Bridgeport Police Department is located at 300 Congress St. in The Hollow neighborhood in the city of Bridgeport. Local Bridgeport police are working around the clock to keep local communities safe. While this is a large police station, officers and dispatchers are always pleased to help us to process bail 24/7.

Troop “G” State Police in Bridgeport is located at 149 Prospect St in Downtown Bridgeport. CT State Police Troop “G” is headquartered in the city of Bridgeport, with the responsibility of covering 20 cities and towns in lower New Haven and Fairfield counties.

This police barracks is easily accessible off both I-95 and Route 8.

Usually the Trooper brings the bond agent inside the facility to process the bail electronically.

Defendants are usually present and are released with the bondsman’s paperwork.

Bridgeport Troop G will “Temp Surrender” a “Prisoner” to Bridgeport Correctional Center if they do not make bond promptly or get a PTA.  Bridgeport Bail Agents are encouraged to call troopers ahead of time when working someone’s release.

Keep this in mind. The State Police are Troopers, not officers and do not like to be called officers.

Sometimes the Troopers are called “Off the road” to come back to process a bond, especially during the week when they are not fully staffed.

For parking at this police barracks in Fairfield County, there is a lot that can hold up to about 15 vehicles.

The Bridgeport Courthouse is located at 172 Golden Hill St Bridgeport. Court services are open Monday through Friday from 9 AM to 5 PM. Learn more about the Bridgeport superior court here.

Find our local Bridgeport bail bonds service now! The bail bondsman number is (203) 838-4920. 3-D Bail Bonds takes pride when serving Bridgeport communities and surrounding towns. Our upscale 24-hour bail bonds service is available to all with flexible payment plans and covering only state-mandated minimum fees. Learn more about who we are and what we do by reading our testimonials. Find us on Facebook. Twitter, and You Tube for the latest on CT bail bonds.

When someone is arrested in a nearby city, we can help immediately. Find a bondsman in Norwalk, Trumbull, Stamford, Westport, and Greenwich.

What’s the crime rate in Bridgeport?

How to find affordable Bridgeport bail bonds near me? Learn more

City of Bridgeport, what to visit.

Serving every city 24 hours, our bail bondsmen in Fairfield County are near you.

Check our newest profile on Foursquare

Are you an active neighbor on Nextdoor? Connect with us, to stay tuned with local bail-related FAQs.

Check a 5-star review from a happy Bridgeport client.

Watch our latest video about our local bail bonds services on Vimeo.

Choosing between a public defender and a private lawyer, see article.

For Bail Bonds in Bridgeport, CT –

Did you post bail with a payment plan? Pay your bail bill here!

Find Bail Bonds Near You Now!